The Pursuit Of Ignorance, From Bush To Palin And Cain 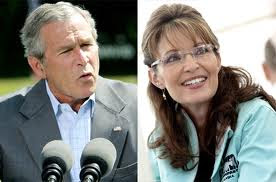 Ta-Nehisi Coates writes about how Herman Cain "ardently pursues ignorance." Boasting of one's lack of knowledge and passing off crude anti-intellectualism as anti-elitism is a common thing in contemporary American politics. My impression is that while it's always been around in some form, it became a much bigger deal in the wake of George W. Bush.
I don't think Bush actively planned things out this way. There's the video comparing how he talked in the gubernatorial debates against Ann Richards to his performance against Kerry -- back in the old days, he seemed to be trying his best to look smart, speaking clearly and rattling off facts and policy proposals.
In 2000, the media played up the Bush versus Gore contrast as a simple Texas yokel versus an cold-blooded intellectual. It so happened that Bush won, though I really don't see reason to think the contrast in level of education actually worked in his favor. But what happens in the wake of victory is that the media spins every feature of the winner, especially the ones it's made most salient, as winning traits. The converse happens to the loser.
Many in the next generation of Republican politicians -- Cain and Palin, for example -- took their lessons from the story the media told them. While Bush more or less backed into the position of the proudly uneducated person by accident, they came to regard it as a winning political strategy. Moreover, it's a strategy that fit them really well. Absorbing complex policy views, even if they're crazy, takes some work and intellectual effort. Cain and Palin weren't up for doing that, whether for reasons of ability or time or sheer laziness. So they pursued the supposed winning strategy that was open to them.
The funny thing is, I don't actually think Republican primary voters actually put a premium on this. They have high opinions of people like Paul Ryan and Newt Gingrich, who have all kinds of complex views about policy and don't actively try to come off as ignorant.
Posted by Neil Sinhababu at 11/19/2011 09:00:00 AM

It so happened that Bush won

If by "win", you mean lost the popular vote and was gifted the electoral college by the Supreme Court after a perfect storm of Ralph Nader, butterfly ballots, etc. made Florida a virtual tie that likely would have gone to Al Gore if a full statewide recount had been allowed.