Democrats end this election cycle moving up from 53 to 55 Senate seats -- an especially impressive achievement when one considers that they were defending many more seats than Republicans. That they still have control of the chamber is a gift from the Republican base, which thrown away three or four good Senate candidates in each of the last two elections. Consider: 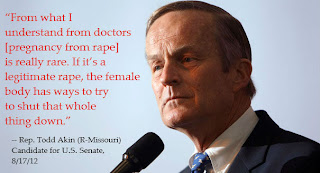 The problem Senate Republicans keep having is that extremists defeat their more electable candidates in primaries. Jonathan Bernstein writes that "in Senate races, Democrats appear to have had a massive advantage in recruitment" which I suppose could be true at some level. But the really serious problem shows up at the point where the best candidates you've recruited have to win a primary. They get defeated by extreme conservatives who in a surprising number of cases have callous attitudes towards rape victims.
Posted by Neil Sinhababu at 11/09/2012 08:36:00 AM

This is really astounding. NV was a genuine recruiting fail, Lowden was on her way down before the chicken thing (though had Lowden pushed out a more electable candidate already?). But I think a non-crazy candidate would have won CO, CT 2010, DE, IN, and probably MO. I think Murphy still wins CT 2012 and Reid sticks around, and maybe, just maybe, McCaskill wins in MO anyway. Still, without all those failures, the Senate would be somewhere between 51-49 and 49-51.

Also don't forget that Buck made some retrograde comment about how Senators shouldn't wear heels, or something.

The guy I was afraid of in NV was Danny Tarkanian. He was more or less Generic Republican, and I think a guy like that was a real threat to beat Reid.

To be fair, I strongly doubt that if not for Linda McMahon we would now have two R senators from Connecticut.