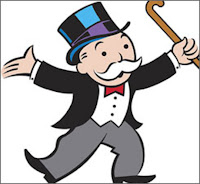 Scott Lemieux's coverage of a recent Supreme Court ruling described a pretty awesome evil plan that people are using, and by people I mean corporations: "Antitrust law makes it illegal to use monopoly power to exploit customers—but corporations can use their monopoly power to compel customers to waive their right to bring an antitrust challenge." Basically, monopolies can leave you with no option but to sign a "don't accuse us of being a monopoly" contract.

There's an "effective-vindication rule" on the books designed to allow customers to still bring antitrust challenges in cases like these. Unfortunately, a conservative majority of Supreme Court justices have subverted it in the case at hand.
Posted by Neil Sinhababu at 6/24/2013 04:19:00 AM