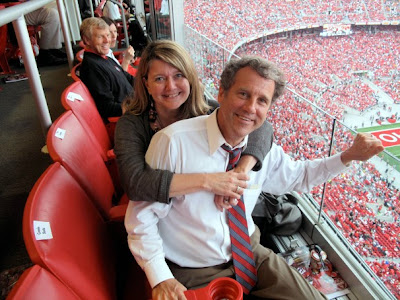 I had a chance to meet some DC Democratic insiders this weekend, and there was discussion of the exciting possibility of SAFE Banking Act author Sherrod Brown becoming chair of the Senate banking committee in 2015 if Democrats control the chamber.

Right now Brown is 5th in seniority, behind chair Tim Johnson, Jack Reed, Chuck Schumer, and Bob Menendez. Johnson is retiring. Reed is going to be a good West Point man and run the Armed Services committee. Menendez would rather have the Foreign Services gavel than the Banking gavel -- people said he'd rather have a gig that takes him to France and Italy than to data centers in Seacaucus.

So it all comes down to Schumer. Wall Street absolutely wants their Schumer running that committee instead of Brown, but there are a few reasons why he might pass it up. If Senate leadership positions open up, Schumer might prefer those. He's done a pretty good job of representing Wall Street while not infuriating the national Democratic base over the course of his career, but becoming chair of the Banking committee would make that balancing act a more difficult and all-consuming job. Fail one way, and alienate big financial supporters. Fail the other way, and become nationally hated by progressive Democrats in a manner only exceeded by Lieberman. Either way, his path to Senate Majority Leader could be blocked forever.

What if Brown were to become chairman? Ryan Grim reports:


Several bank lobbyists and Wall Street analysts told Politico the industry wasn't looking forward to a Brown regime. "It would be a monumental shift in terms of both tone and substance from the [Chris] Dodd and Johnson chairmanships,” Isaac Boltansky, an analyst at Compass Point Research Trading, told Politico. “I think everything from too-big-to-fail banks all the way down to issues impacting the unbanked and underbanked would suddenly see a new energy behind them."

Or to pass on a quote from one person who works with Brown and other Senators: "I'm going to have to wear a flak jacket around him." It took me a moment to understand, but the idea was that his enemies in the financial industry might want him assassinated. Sherrod, after all, is the guy who didn't accept his congressional health care package for a decade while he was in the House, in protest of the fact that all Americans didn't have health care. People were talking to me about how he feels bad about himself if anyone gets to the left of him on economic issues. People were also doing impressions of Sherrod's  raspy voice.

A Brown regime would mean good things for Elizabeth Warren (as Grim notes), as their very similar ideological inclinations have made them allies. One nice comment I got from an ancient Democratic insider was that when Warren does things like calling out the SEC for not litigating enough, other Democrat who aren't playing such a vocal role tend to sort of wish they were asking such tough questions and getting the media attention. If that's right, it's exactly the sort of dynamic that we want.
Posted by Neil Sinhababu at 6/04/2013 05:13:00 PM