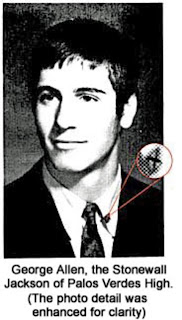 Over at 538, Tom Schaller asks whether the discovery that Bob McDonnell's graduate thesis contained lots of retrograde views on gender relations will be his 'Macaca Moment.' Polls suggest that this isn't happening immediately, but here it's important to remember exactly how the Macaca scandal played out. Macaca didn't come out of nowhere -- before that, the media had been sensitized to the possibility that something was wrong with George Allen's views on race by a number of previous events.

The Allen event that seems most similar to the recent McDonnell revelations came several months before the Macaca incident that everyone remembers. In April of 2006, TNR's Ryan Lizza came out with a big article on George Allen's love for the Confederate flag, which included the revelation that Allen had been wearing a Confederate flag pin in his high school yearbook photo. With that, and a bunch of similar things in the background suggesting that Allen wanted to support white people's struggle against people of color, the Macaca scandal had exactly the background it needed to damage his efforts for re-election. (To follow that up, the Allen campaign did an absolutely horrendous job of damage control, coming out with a new explanation for what Allen had meant seemingly each day after the scandal, and each explanation conflicted with their previous ones.)

I don't know if there's enough time left until Election Day for McDonnell to follow this up with something really disastrous. If he doesn't, he probably wins. But he's put himself in a position where a real-time campaign slipup could really damage him.
Posted by Neil Sinhababu at 9/04/2009 11:17:00 PM

With that, and a bunch of similar things in the background suggesting that Allen wanted to support white people's struggle against people of color, the Macaca scandal had exactly the background it needed to damage his efforts for re-election.