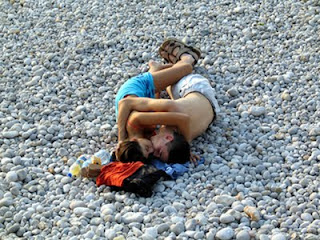 Amanda finds the good news that you might've missed amidst all the eyecatching bad stuff:

the HHS announced that birth control is going to start being free to women with insurance. When it starts being free to you depends on when your insurance plan begins---it could be as late as 2013 for many women---but still. Free birth control. And by birth control, I don't just mean the pill or the ring. You will also be able to get your tubes tied, an IUD installed, or an implant put in....all for free. No co-pay for any contraception. Free pills is a good thing and should reduce unintended pregnancies, but the free long-term birth control methods may be a bigger deal. A lot of women would prefer to have these kinds of birth control, but the up front costs are just too daunting. Preliminary research shows that women who have access to free long-acting birth control both are far more likely to use these methods and, unsurprisingly, have fewer abortions.

The stock market may fall; our bond ratings may go down. And we will fuck our way through it all.
Julian may be right that in a better world the government would provide birth control as a means-tested entitlement for people below a particular income level, rather than through an insurance regulation covering everyone. But we're in a world where Republicans won't let you raise taxes to pay for socially beneficial programs -- especially those that help the poor and 10especially those that help people lead satisfying sex lives. So we have to fund nice things some other way.
When Julian criticizes this by saying "And that seems a little like salt in the wound: Isn’t it bad enough to not be getting laid regularly without having to pay for the people who are?" I say: it's not salt, it's the fucking balm of Gilead. If you're a woman and you're frustrated about not getting laid regularly, get yourself some free birth control and find yourself a man! And if you're a man and you're frustrated about not getting laid regularly, go find the woman in the previous sentence! This is the kind of regulation that enables us to make our own lives better.
Posted by Neil Sinhababu at 8/06/2011 03:11:00 AM

Neil, I feel like you're engaging in the same fallacy as many of the people pushing against freely available birth control: i.e. that free birth control means that people will immediately engage in drastically more sex. The real value of birth control is in how it allows women to plan their lives without worrying about unwanted pregnancies, so we might see more women setting long-term career or life goals. I seriously doubt, however, that it will significantly increase the number of women engaging in sex.

Okay, maybe not drastically more, as awesome as that would be. But somewhat more?

Or in the words of Stephen Stills:

Turn your heartache right into joy,
she's a girl, and you're a boy.
Get it together, make it nice,
ain't gonna need any more advice.