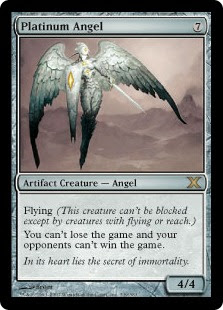 The 2011 iteration of the debt ceiling crisis may have come and gone, but in the future I hope people will remember that the president can order the creation of platinum coins of arbitrarily large denominations.
Our bottlenecky political system threatens to create all sorts of funding crises in the future as veto players withhold their approval from measures necessary to keep the government operating. Sometimes people will be reasonable and disaster will be averted, but we can't always count on that. So there's going to be need for a way for making money come into existence to resolve crises.
With excessively low inflation, we're going to need a way to get the money supply up and get ourselves out of liquidity traps. In a good platinum coin seigniorage article, Scott Fullwiler writes that "as long as Congress doesn’t appropriate spending great enough to be inflationary, there’s no inflation problem, regardless of whether we use coin seigniorage to make the debt ceiling irrelevant." I think the antecedent needs to be taken seriously -- shutting down federal spending because of the debt ceiling or some other political problem will push things in a somewhat deflationary direction, just as elevated federal spending will be somewhat inflationary. And that's a good thing! We've been closer to the vices of deflation than inflation in recent years, and more federal spending will help.
Obama missed the opportunity in this crisis, his own chance at a grand FDR-style presidential act of monetary expansion. Maybe in the future, someone else will go platinum.
Posted by Neil Sinhababu at 8/02/2011 11:00:00 PM