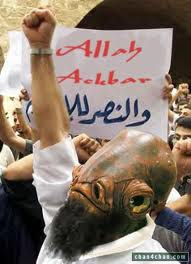 Congratulations to the Libyan rebels on reaching Tripoli, where they've met little resistance from Gadhafi's forces and captured two of Gadhafi's sons. You can see the celebrations outside the Libyan embassy in Tunisia a little while ago when the Tunisians officially recognized the rebels as the legitimate government of Libya (the Libyans can't figure out whether to hold up one finger or two, but that's okay). Hopefully in a few days, there'll be more on which to congratulate them. They should know that Americans who appreciate Star Wars rebel jokes are proud to support them.

There's been some turmoil in the rebel leadership after the death of one of their top army officers. I've been pretty impressed with some of the people running things there -- Mustafa Jalil, who was praised by Human Rights Watch for his stand against mistreatment of political prisoners, and UW economics professor Ali Tarhouni. Hopefully they can get things together and run the country.
Posted by Neil Sinhababu at 8/21/2011 03:23:00 PM