As far as I can tell, this year's most important Democratic Senate primary is in Hawaii, where solid left-wing Democrat Mazie Hirono is facing off against right-wing Ed Case. I really don't want to see Ed Case going to the Senate and supporting Republican wars and tax cuts like he did in the House, or getting in the way of Democratic initiatives like Ben Nelson and Joe Lieberman. This is the time when I can prevent that from happening. So I've donated $1000 to Mazie Hirono.
Case was in Congress from 2002-2007. While he got 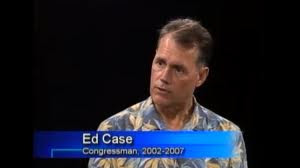 his seat too late to vote in favor of the Iraq War, he announced his support for the war during the campaign and was opposing withdrawal from Iraq as late as August 2006. He's basically the Hawaiian Joe Lieberman -- in fact, he endorsed Lieberman's presidential campaign back in 2004 as well as Lieberman's run for Senate as an independent against Democrat Ned Lamont in 2006. He supported Patriot Act reauthorization and supported keeping Guantanamo open after visiting it.
Lots of Democrats have cast various kinds of bad votes, but what really stands out about Case is his support for cutting taxes for rich people. In 2006, he was one of only 34 Democrats (who sided with 196 Republicans) to support reducing the estate tax. He also was one of 15 Democrats (who sided with 229 Republicans) to support cutting capital gains taxes and dividend taxes. And then there's this crazy vote, which I'll let Down With Tyranny explain with characteristic force:

Back in 2005 an amendment by far right sociopath Jeb Hensarling (R-TX) targeted NPR, PBS, the National Endowment for the Arts, and Title X family planning all in one shot. Only one Democrat crossed the aisle to vote for the most extreme piece of legislation of that session... Ed Case.

Apparently it was legislation to protect lots of tax cuts by cutting spending on programs including those above. And Ed Case was, indeed, the only Democrat to vote for it. 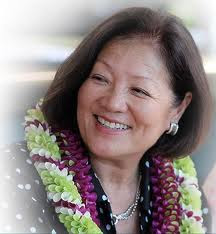 Mazie Hirono, meanwhile, is the kind of Democrat you'd hope for from Hawaii. She has perfect scores from NARAL, Planned Parenthood, the Human Rights Campaign, the Humane Society, and 90% or over on every legislative rating I can see from the ACLU and major environmental organizations. She's got the AFL-CIO's endorsement against Case and has a bunch of favorable ratings from unions. And she has perfect 0% ratings every year she's been in Congress from the Club for Growth, which gives you higher numbers if you support massive tax cuts for rich people. (Meanwhile, Club for Growth contributor and billionare investor Charles Schwab picked out Ed Case as one of the few Democrats he'd contribute to.) She'd also be the first Buddhist in the Senate, which would be pretty neat.
In primaries it's important to think about who could win the general election, and it seems that Hirono has an advantage there. She leads likely Republican opponent Linda Lingle by 6 points in the most recent independent poll, which has Case losing by 2. I was surprised by how well Lingle did in the poll, and I expect Democrats to outperform these numbers in 2012 with a native son running for president and drawing out Democratic voters. But in any event, this doesn't appear to be a case where you lose votes in the middle by supporting a more left-wing candidate.
There are lots of places in the country where I'd be willing to tolerate a conservative Democratic Senator. I could easily accept someone with Case's voting record from Idaho or Alabama or somewhere like that. But having Hawaii produce a conservative Democrat who undermines Democratic initiatives and supports Republican wars and tax cuts is not an acceptable result. Primaries are when you get to prevent that from happening, and I'm doing what I can. If you're interested in helping out too, you're definitely welcome to use my ActBlue page.
Posted by Neil Sinhababu at 12/30/2011 03:36:00 AM

How close is this primary race? Any polling available?

The most recent polling has Hirono with a 45-40 lead pdf.

Mahalo for this! Iʻve been an ardent supporter of Mazieʻs ever since I first met her, when she started her Congressional run and I given twice to get her into the Senate. We need Mazieʻs intelligence and capability representing us in DC!

Neil - thanks for the polling info. I've availed myself of your ActBlue link to toss a few shekels Hirono's way. You're right, we just can't have a Democratic haven like Hawai'i being represented by a marginal Dem like Ed Case.