Why Newt Is Going Nowhere 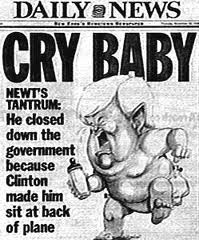 I really don't see much chance of a Gingrich resurgence in Iowa at this point -- his favorable / unfavorable numbers look bad enough that it's hard to see how he comes back. So it's a good time to look back at Jonathan Bernstein's old analysis of why Gingrich couldn't win and see how it played out.
Bernstein put a lot of weight on the strong anti-Newt sentiments of party actors. I didn't understand why this was a big deal, because I couldn't see what a bunch of GOP Congressmen were going to do in the next couple weeks to pull down Gingrich's poll numbers. Now it looks like it wasn't what they were going to do, it was what they'd already done. Support from party actors is important for fundraising and having good staff, and Gingrich had neither. (It didn't help that he was up against a ridiculously wealthy candidate and a bunch of his staff had given up on him earlier in the campaign.)
As a result, Gingrich didn't have the money to defend himself against the Romney-led assault that was blasting him with $34 in negative ads for each $1 he was spending in Iowa, and he didn't have the staff to make sure he was on the ballot in Virginia. (His whole 'Pearl Harbor' schtick about not making the ballot would've been offensive if it wasn't so laughable. That would've been like Pearl Harbor if we lost all those ships because we never maintained them and they just sank.)
One other thing we didn't see was Fox News and conservative media rushing to Newt's defense against the more moderate Romney. As a matter of fact, the perfect example of a GOP media personality with books to sell -- Glenn Beck -- came out strongly against him. That's the part of the Republican Party that could've saved him by putting enough pro-Newt stuff on the air to counter the insane amount of money Romney was throwing at him. But they clearly didn't feel any need to do that.
Posted by Neil Sinhababu at 12/28/2011 02:24:00 PM