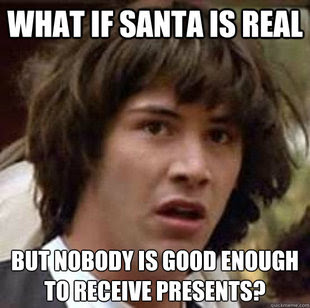 Donkeylicious and Conspiracy Keanu wish all of you a Merry Christmas!
If you're looking for some good cheer, I'd recommend Ezra Klein's article on how Obama has done pretty well in his negotiations with Congressional Republicans throughout 2011. Obama often ended up offering concessions that made it look like he was losing at the time, but for a variety of reasons they didn't really amount to much of anything terrible. For example, the supercommittee failed to do anything, so we got $500 billion in defense cuts and the same amount in other spending cuts which don't include major entitlement programs that help the poor. I don't know how much credit Obama deserves for the fact that it looks like the Bush tax cuts won't be renewed, but that's definitely a good thing for those of us who want the government to be adequately funded in the future.
Posted by Neil Sinhababu at 12/25/2011 04:41:00 AM