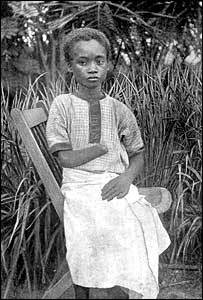 I knew that terrible things had happened in the Congo under King Leopold at the turn of the century, but reading Heart of Darkness didn't really prepare me for the thing about the hands:

To extract the rubber, instead of tapping the vines, the Congolese workers would slash them and lather their bodies with the rubber latex. When the latex hardened, it would be scraped off the skin in a painful manner, as it took off the worker's hair with it...

...Failure to meet the rubber collection quotas was punishable by death. Meanwhile, the Force Publique were required to provide a hand of their victims as proof when they had shot and killed someone, as it was believed that they would otherwise use the munitions (imported from Europe at considerable cost) for hunting food. As a consequence, the rubber quotas were in part paid off in chopped-off hands. Sometimes the hands were collected by the soldiers of the Force Publique, sometimes by the villages themselves. There were even small wars where villages attacked neighbouring villages to gather hands, since their rubber quotas were too unrealistic to fill.

Go look up Joyce Kilmer's takedown of the Belgian regime, with its refrain "Hark to the yell of Leopold's ghost/Burning in Hell for his hand-maimed host."

Yes, that Joyce Kilmer. He may have had a thing about trees, but he was perfectly clear-sighted when it came to mercantilism.

How emabarrassing. It wasn't Joyce Kilmer, it was Vachel Lindsay. Oh well, American poets were as interchangeable then as they are today.