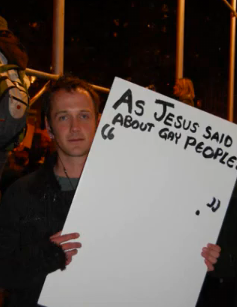 I'm sure this response to gay marriage supporters sounds clever to the people who say it, but it really doesn't work:

So suppose we banned heterosexual marriage, and legalized gay marriage. Straight people could still get married! And they'd have about as many legally available partners as they had before! It's just that they wouldn't be interested in sexual relationships with any of these people.
Obviously, this would be a disastrous infringement on the rights of straight people. If you're a straight person and you can feel how messed up it would be if only gay marriage were legal, you can feel what's wrong with only heterosexual marriage being legal.
Posted by Neil Sinhababu at 12/01/2011 12:04:00 PM