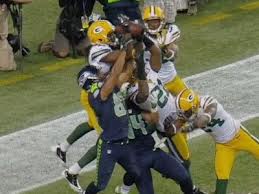 I don't think anybody is going to top Marcy Wheeler's name for last night's Green Bay Packers interception, mistakenly ruled a touchdown by replacement referees because the NFL had locked out the union refs: The Scab Grab.

Fail Mary is good too, but there have been lots of things that could get that name and it should be saved for later.

The fact that the offensive pass interference call was missed too by the replay booth (Golden Tate shoves a Packer out of the way) just adds to the disaster.
Posted by Neil Sinhababu at 9/25/2012 11:23:00 AM

I'm not sure the replay officials are allowed to add new penalty calls based on replay reviews. I think they only look at possession of the ball. Either way, the refs screwed up enough to make the outcome meaningless.

Yeah, I think you're right about that, Max.

Actually, Max isn't quite right ... possession isn't reviewable. Just about all the replay officials could look at was whether the pass was complete or incomplete, irrespective of the identity of the player who caught (or didn't catch) the pass.

There's no doubt whatsoever that the pass was caught, which is why the ref stated that "the ruling on the field is confirmed". Of course, exactly what was decided on the field, aside from the fact of catch vs. non-catch, isn't quite clear. Unlike possession of the ball, the contradictory rulings were essentially simultaneous. The true failure, then, is that the referee didn't talk to the two officials to hear their reports and to determine whether they still disagreed. Did they believe it was simultaneous possession? What did they see regarding ball location when first touched and as they went to ground? Based on that conference, the ref would have a fuller idea of what actually was ruled on the field.

If they'd talked it over, it's quite possible that the referee would have determined that the field ruling was interception, not touchdown. In which case the ruling would stand as a Packer victory. From his (obscured?) vantage point 30 or more yards away, the ref just arbitrarily chose to acknowledge the TD call instead of the interception call.

Whatever else can be said about the mess, nothing that was seen under the hood could have provided incontrovertible evidence for overruling the field decision.