When People Try To Push You Into Dumb Wars, It Looks Like This 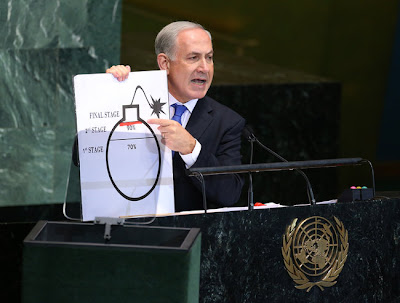 Isabel Kershner and Rick Gladstone report that Israelis are confused about what Netanyahu's bomb diagram meant at the UN. And of course they are -- it wasn't actually a diagram meant to communicate useful information about anything. It was just an crude attempt to stoke fear of Iran, and nudge the US into a disastrous military conflict. I'm glad to see that people in the US mostly just made fun of him.

Oh, no! And Israel won't have nuclear weapon capacity for another, oh, -45 years or so. Not that a hostile nuclear presence in the neighborhood should bother Iran, right?

It's not enought to just quote Santanya... Yet, again and again the efforts by warmongers succeed...

Yup, fairly ridiculous (also remember that Netanyahu pushed back when they'd cross the "red line" by another year from his previous statements). I would remind people that there does seem to be a push for a war with Iran coming from many of the neo-conservatives that are now surrounding Romney in the form of demanding a use of force authorization from Congress to "negotiate" from a "better position." But we of course know what would happen under another neo-con cabinet. A authorization of the potential use of military force would become a approval of large scale war. We would be put into "crisis mode" as in "this has to be resolved right now." And of course any potential deal offered by the Iranians or a third party would be rejected as not good enough. Just like the lead up to the war in Iraq. Indeed, Romney's communications director, I mean WaPo blogger, Jennifer Rubin has thrown her weight behind this plan too.