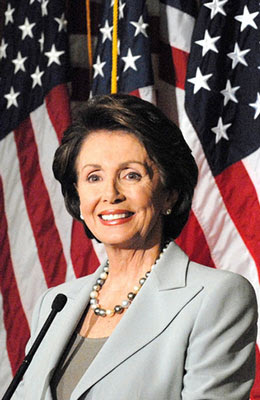 Glenn Thrush: "House Speaker Nancy Pelosi tells Politico she's "urging" President-Elect Barack Obama to quickly repeal Bush administration tax cuts for the wealthy -- not wait for them to expire in 2010, as Obama has suggested he might do."

I've always been a tremendous Pelosi supporter, and you can count me a good queen's man on this one too. The Bush tax cuts are absolutely dismal as a stimulus measure. The CBO ranks their cost-effectiveness as 'small' on a scale of small to medium to large, while Moody's ranks them as the 12th most cost-effective stimulus measure among the 13 measures they rank. Those statistics are for making the tax cuts permanent, but other than speed (which is ranked separately) I can't see why those cost-effectiveness numbers wouldn't be decisive on the question of when to repeal the tax cuts.

Pelosi hasn't gotten nearly as much love as she deserved from the Democratic base over the last four years. I think this is partly because people carried over their justified Gephardt-era dislike of the House leadership and didn't realize how much things had changed with Pelosi's ascension. Whether the things we're seeing are genuine disputes between Pelosi and Obama or goodcopbadcoppery for the folks at home, I think the base will spend a lot of the next couple years learning to love their Speaker of the House.
Posted by Neil Sinhababu at 1/19/2009 04:21:00 AM

I favor the House repealing the Bush tax cuts for an entirely different reason.

Once they are passed (and there is a lingering threat of pushing them to the floor through reconciliation) then not repealing them is a bargaining chip in the Senate. A bargaining chip that ought to be able to obtain quite substantial concessions in the direction of truly effective stimulus ... for example, public transport and rail spending more than $6b for buses and $4b for rail, compared to $30b for highways.

I live in Pelosi's district and am sometimes a ferocious critic. Most of these people don't hold up under closer inspection. And the constituents of a Speaker can easily feel pretty unrepresented by a rep whose first job is to hold together her caucus.

But I agree she may seem better to many of us going forward. I attribute that to her having a larger majority. But her positions are greatly constrained by having the odious Steny Hoyer permanently breathing down her neck. Her aides clearly think there are Congresscritters who'd unseat her for excessive liberalism if they could.