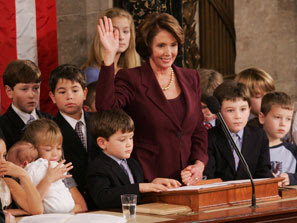 Interesting article from Glenn Thrush about Republicans admitting that attacking Nancy Pelosi has gotten them nowhere. I liked this bit:

“Pelosi’s a particularly tough demographic to demonize,” says a senior Republican strategist who has okayed several anti-Pelosi ads during the 2006 campaign.

“She’s a woman, and she’s of a certain age level, and that’s a demographic both parties are trying to court. She just doesn’t evoke that same kind of visceral reaction [as Limbaugh]. She’s not a big, bellowing heavyset guy who is prone to controversial statements.”

Asked to gauge the impact of dozens of anti-Pelosi ads and mailings created by the GOP in the past three election cycles, the consultant replied, “Bleh. Nothing.”

I've long wanted to have Nancy play 'bad cop,' ramming progressive legislation through the house so that Obama ends up looking relatively moderate (and so that the inevitable Collins/Snowe/Nelson crappification of everything in the Senate still results in good legislation). With Republicans admitting that they can't get anything to stick to her, the case for this sort of strategy only looks stronger.
Posted by Neil Sinhababu at 3/07/2009 08:37:00 AM

I guess demonizing grandmothers isn't such a hot strategy after all.