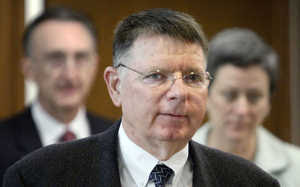 Via Jeff Fecke, here's a comment that illuminates the late-term abortion debate by making clear what George Tiller, recently murdered by an anti-abortion terrorist, did for a living:

In 1994 my wife and I found out that she was pregnant. The pregnancy was difficult and unusually uncomfortable but her doctor repeatedly told her things were fine. Sometime early in the 8th month my wife, an RN who at the time was working in an infertility clinic asked the Dr. she was working for what he thought of her discomfort. He examined her and said that he couldn’t be certain but thought that she might be having twins. We were thrilled and couldn’t wait to get a new sonogram that hopefully would confirm his thoughts. Two days later our joy was turned to unspeakable sadness when the new sonogram showed conjoined twins. Conjoined twins alone is not what was so difficult but the way they were joined meant that at best only one child would survive the surgery to separate them and the survivor would more than likely live a brief and painful life filled with surgery and organ transplants. We were advised that our options were to deliver into the world a child who’s life would be filled with horrible pain and suffering or fly out to Wichita Kansas and to terminate the pregnancy under the direction of Dr. George Tiller.

We made an informed decision to go to Kansas. One can only imagine the pain borne by a woman who happily carries a child for 8 months only to find out near the end of term that the children were not to be and that she had to make the decision to terminate the pregnancy and go against everything she had been taught to believe was right. This was what my wife had to do. Dr. Tiller is a true American hero. The nightmare of our decision and the aftermath was only made bearable by the warmth and compassion of Dr. Tiller and his remarkable staff. Dr. Tiller understood that this decision was the most difficult thing that a woman could ever decide and he took the time to educate us and guide us along with the other two couples who at the time were being forced to make the same decision after discovering that they too were carrying children impacted by horrible fetal anomalies. I could describe in great detail the procedures and the pain and suffering that everyone is subjected to in these situations. However, that is not the point of the post. We can all imagine that this is not something that we would wish on anyone. The point is that the pain and suffering were only mitigated by the compassion and competence of Dr. George Tiller and his staff. We are all diminished today for a host of reasons but most of all because a man of great compassion and courage has been lost to the world.

We want there to be doctors who do things like this. Because of anti-abortion violence and intimidation, there are only a few left. George Tiller was murdered for being one of them.
Posted by Neil Sinhababu at 5/31/2009 08:30:00 PM