Nancy Pelosi Is Russia In Winter 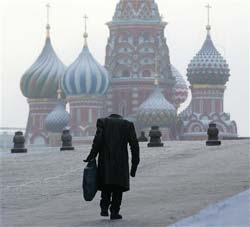 Daily Kos has Pelosi's net favorability falling 10 points, which is basically what you'd expect to happen when a figure most Americans don't have strong feelings about gets attacked on the news for a week.  It's something Republicans could feel happy about, I suppose.
But all we've got here are tactical victories of no strategic value.  Attacking Pelosi is like invading Russia.  The Russians retreat, give ground, let you take more territory.  It feels like you're winning!  And then around November, it starts to get really cold.  Pelosi does fine in November -- she just has to win one election on her home turf.  Linking other Democrats to her has never worked, since she keeps such a low profile.  People in some other Democrat's district are going to think of Obama long before they think of her.  All the cold hard ground you've gained is worthless.
Posted by Neil Sinhababu at 5/22/2009 09:27:00 AM

Its not about the voters; its about bullying/intimidating the democrats.