Jews In The Iranian Parliament 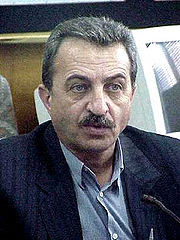 It's looking like Mahmoud Ahmadinejad is not going to join George Allen on the list of the world's surprise Jews. But if you're looking for Jews in Iranian politics, meet Ciamak Moresadegh and his predecessor Maurice Motamed, the present and previous Jewish members of the Iranian Parliament.

Motamed (pictured at right) was in office while Ahmadinejad was denying the Holocaust, so he spoke out against that. But overall their public pronouncements generally seem to be positive about Iran, and they like to make the point that Iranian Jews aren't doing too badly. I'm sure this is partly because it's risky to be a dissident in Iran, but there's also the fact that members of any parliament are generally going to be patriotic people. Obviously there's a pretty clear limit to how high a Jew can rise in Iranian politics, support for Israel is a no-no, and the Iranian Parliament isn't the real power in the country, but it's still pretty impressive that they're there.

According to the 1906 Iranian Constitution, one seat in Iran's Parliament is reserved for Jews. (My joke here is that 'seat' does in fact mean a office with voting powers, and not some kind of chair that blows up.) I was really astonished when I first learned that some countries organize their legislative bodies in this way, with dedicated numbers of seats set aside for various ethnic groups.
Posted by Neil Sinhababu at 10/06/2009 03:20:00 AM

Why are you surprised that countries have dedicated representation for specific minorities? The US does it, after all; it's just that the minorities we single out for representation are geographically based. We're reserved three seats in our national legislature for the 0.3% of the people who live in Montana, for example.

Once you've accepted the idea of dedicated representation for geographic minorities, it seems less surprising that other kinds of minorities might get reserved seats too.