Push Poll Fail And Other Stories 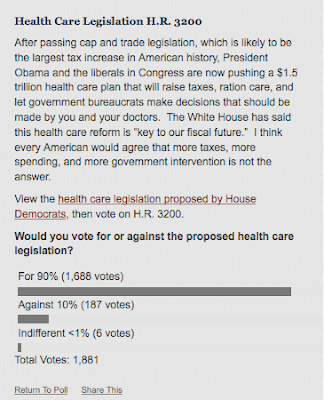 The image at right is from the website of Rep. John Culberson (R-TX), who put his feeble push poll up against the mighty tubes.

Culberson, of course, isn't going to be a persuadable vote. But Chris Bowers is telling us that these Congresscritters are undecided on the robust public option. It's been a long hard slog for several months, but we're getting really close to a vote, and they're counting votes in the House. He's got the phone numbers and all, so give them a ring, especially if you live in their district or their state. It's kind of frustrating to be in the wrong hemisphere for this. I don't have an American number, but most of you do. If your representative is on the list, put in a call.

Also if you're in Indiana (where Evan Bayh is making trouble) or Nebraska (where Ben Nelson is being Ben Nelson) make a call for the opt-out public option. Chris thinks they're the two who are holding things up. We could also use help with Pryor, Lieberman, and Landrieu. And while Conrad and Baucus are probably going to vote for whatever they decide on, the fact remains that they're making the decisions and their staffers are always deserving of a nice chat with you.
Posted by Neil Sinhababu at 10/24/2009 05:01:00 AM

Careful. If you keep it up with these charts people will start mistaking you for me instead of the other way around.

No, wev. More charts are always better. Forgot to include the smiley face :).