David Broder Will Never Get What He Wants 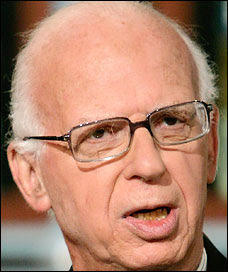 A couple days ago, David Broder wrote an article bemoaning the fact that the vote on the health care bill will follow partisan lines. As usual, he wants it to be bipartisan, or at least claims that he wants that. But if he really cares about getting members of both parties to support the same piece of legislation, he's found himself an utterly ineffective way to support it.

Say you want something. Anything. Maybe you want a public option in the health care bill, or campaign finance reform, or America to go to war against Antarctica. Or maybe you want bipartisanship in the Senate. What you do is, you focus on the culprits -- the influential opponents of the public option who could choose otherwise, or the special interests who are blocking campaign finance reform, or the dirty penguin-lovers in the Senate. Or the people who were politically positioned to cross party lines, but chose not to of their own volition. And you call them out. Or you can find your heroes -- people who do what you wanted, and extol their awesomeness.

What you don't do is just declare a pox on everyone's houses and go home. In a two-party system, politics is a zero-sum game, and nobody loses when there's a pox on both houses. So poxy moves that hit both sides have no net effect on anything. If your only way of complaining when you don't get what you want is to do something that has no net effect on the players, you'll never get what you want. If you want bipartisanship, you may have to get partisan in your criticisms. You have to call out the people who could've done the bipartisan thing but spectacularly failed to do so. If they happen to be in one party, turn your invective on that party. That would involve becoming partisan for bipartisanship's sake. It might feel uncomfortable, but if you refuse to do that, nobody has any reason to do what you want for fear of being criticized by you.

Going partisan in defense of bipartisanship is something that Broder doesn't do in his article, and -- if I understand the guy -- it's something he'll never do. No party has to worry that if they obstruct business, filibuster, and refuse to negotiate in good faith, David Broder's wrath will fall on them alone. And that's why the one thing he pines for so loudly is the thing that he'll never be able to effectively push for.
Posted by Neil Sinhababu at 12/27/2009 05:16:00 AM

I get the sense that folks like Broder care more about striking the right pose (appearing to be a reasonable, fair-minded, publicly spirit impartial observer who doesn't play partisan or ideological favorites) than any actual policy results. Broder's nonsense would be hard to maintain if one actually cared about policy outcomes. Although, I wonder if at this point Broder is too mentally checked out to follow the logic of your argument. He still seems to be living in the 1970s when there was actually still very substantial ideological overlap between the parties.

I agree with all of that, ikl.