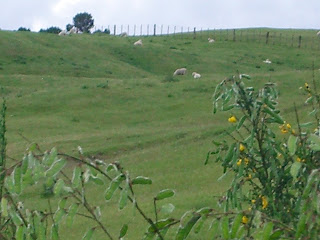 I'm in Sydney right now, having flown in Friday afternoon from New Zealand. The trip is going well. As I'm giving four talks next week, you probably won't see much blogging from me soon, but after that things should get a little better.

Last week I was riding down to a conference with some Kiwis. They told me that the sheep-dotted hillsides of New Zealand mostly used to be forests a century ago, before being cut down for grazing land by European settlers. Now we look at those lovely hills and think, 'That's New Zealand.' Literally, that's right, but the country only got that way because of a thing that people did. And it's a thing that in the modern world, we don't want people to do. For a variety of reasons ranging from biodiversity conservation to climate change, we don't want people to cut down forests.

Right now, the burden of not doing massive deforestation for agricultural purposes is going to fall primarily on poor nations where farming is a big part of the economy. Other developing nations will face the same problem on other questions -- if you're transitioning from agriculture to cheap dirty manufacturing right now, you're going to be more bothered by regulations on how much carbon a smokestack can belch than you will be if you're transitioning from sophisticated manufacturing to a knowledge economy. But in this case too, there's the fact that we did the farming to dirty smokestacks move in our past as well. We had the chance to make all these transitions without any restrictions about carbon or biodiversity or anything like that.

So what's fair here: for the same restrictions to apply to everybody at the same date, or for the same laws to apply to everybody when their economy is the same age? At one level, the answer is that it doesn't matter what's fair -- we just need to do whatever we can to keep climate change from messing up the world. (This is one of the times when I'm happy to be a utilitarian, so my moral theory need not choose one of these two notions of fairness over the other. I just want whatever maximizes aggregate happiness.) I'm guessing that the only practical solution will fit the first way of construing fairness much better than the second. But as often happens when there are a couple different ways to construe notions of fairness, each of which advantages a different group, the people who don't get their way are going to feel resentment that the people who get their way aren't going to see as justified.
Posted by Neil Sinhababu at 12/12/2009 05:08:00 PM

Still glad that Obama's got your back in the conference committee, Neil?

The Emanuel/Lieberman Healthcare Privatization act will take half a trillion dollars out of Medicare to give directly to private health insurance companies.

Still better stuff than anything I've seen get through Congress in my life.