Have You Driven A Ford Into A Wall Lately? 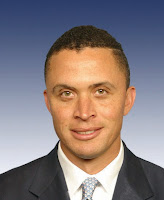 There's definitely room for conservatives like Harold Ford within the Democratic party. I'm going to disagree with him on a bunch of stuff, and in the Senate he'd probably do irritating antics when we're trying to pass major legislation. But he'd be more useful than a Republican in the Senate, and winning elections in places like Tennessee is really hard, so you've got to give him plenty of leeway. Ford lost to Bob Corker only 51-48 in 2006. Maybe another opportunity will come up involving a scandal-weakened opponent or something, and we'll be happy to have him run again in that state.

Except now, as Glenn Thrush notes, he's destroying his conservative positioning and Tennessee cred to make a bizarre primary challenge to Kristen Gillibrand in New York. It seems like he's trying to attack her from the left, which is so out of kilter with his past record of anti-choice and antigay votes (30% NARAL rating, vote for constitutional amendment banning same-sex marriage) that it isn't credible. He'll lose, which doesn't make me that unhappy. I'm more worried that he'll be less effective for winning elections in places like Tennessee.
Posted by Neil Sinhababu at 1/12/2010 10:30:00 PM

Yeah, I don't get his career arc. He runs a shockingly close race in Tennessee, people think he might run Statewide again some day. Instead, he starts running the DLC (good if you want to be in the South!) but then moves to New York (bad!). I guess he's decided that he can't go home at this point.

The high-dollar donors who are supporting him are the same class of guys who supported Joe Lieberman, so I guess he thinks they can make it work for him, but that just seems crazy. Killing the finance wing of the Mugwump party is high on my to-do list.