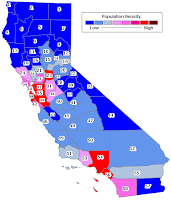 Lots of lefty bloggers I agree with have been railing against the evils of the Senate. But I want to do them one better and argue against the existence of states.

If we didn't have them, we'd laugh at the idea that state boundaries should be drawn where they are. Who would look at New York and decide that New York City needs to be in the same political body with all that other stuff? Apparently back in the old days, the whole state was economically integrated by the Erie Canal, which I guess will impress all the mule owners reading this blog.

And you know the old line about Pennsylvania -- Philly on one side, Pittsburgh on the other, and Alabama in the middle. Why do these disparate regions need to all be part of one unit? It's kind of like those African countries where the borders were drawn by European colonial powers to go along rivers that didn't exist, putting tribes that hated each other into the same country.

As I like to say to those in favor of indefinite detention without review: All you need is a different country with a different history.

States give us identity because the US is too big. In fact, I think the size of the US causes more problems than the Senate.

how would senators be elected? would there be a national election where the 50 highest vote-getters become senators?

I think it would be best to get rid of the Senate entirely. Lots of countries have basically weakened the upper house of the legislature into nothing (India, UK) and it works fine.

I don't see how UK is a relevant comparison, besides the fact that they had two houses. Unlike the Senate, the House of Lords is not elected.

At any rate, the more general point is that it seems with any election there has to be districting of some kind. We can call them states, counties, or whatever. I don't see why reasons against states wouldn't generalize as reasons against others.

Put it differently: Who would look at New York City and decide that Staten Island belongs in the same political body with all others?

Ah well, the dream was nice while it lasted.

Seems a bit extreme to address the problem that we have some individual states so much larger than the median state compared to when the system was first set up. Couldn't we just divide northern and southern California into separate states, instead?

Dude, it's hard enough sharing federal-jurisdiction powers with Alabama and Utah. I wouldn't want to have to share state-level powers with them too. No more public transit, anywhere, ever.

I'm all for federalism. Let the Mississippians have the creationist abortion-free plutocracy they want, and give Vermont and Oregon a chance to build something civilized.

The Senate, on the other hand, is just about worthless.

Matt Yglesias had a blog post about this last October, and he definitely sold me on the idea that states are stupid:

But we don’t have any level of governance that addresses metro area issues. And we don’t really live our lives “at the state level.” And insofar as co-residents of a single state do have idiosyncratic issues in common that tends to be because important fiscal and regulatory powers have been allocated to state government rather than because it actually makes sense for them to have been allocated this way.

Guys, the state level isn't the best one for doing intercity public transit. For the horrors that can ensue, check this out.

I'd much rather see this hashed out in a porky Federal way that brought in the national DOT.

The main problem with rail transport in Australia is that the national government doesn't support it. The systems are inconsistent because they were designed independently. Without state support of rail, there would be no rail.

The same thing has happened in the US. The federal government basically set up a system (Amtrak) that was SUPPOSED to destroy interstate rail in the US. The system survived because of support (including subsidies) from the states.

Huh, tell me more about this Amtrak thing, Helen.

I guess one reason I'm surprised by the idea that the national government can't do intercity rail is that they built the interstate highway system. So clearly transportation leadership from up there is possible. Why can't it work for rail?

Remember, any world in which we abolish states is going to be really shaken up, so existing political dynamics shouldn't be assumed unless they're hard-wired into the system for some reason.

Most of the planning and construction of the interstate system was (and continues to be) done at the state level. Our federal government is not set up to deal with day to day stuff.

This is not unique to the US. The prefectures in Japan kept the rail system from collapsing when JR was privatised and the new companies abandoned half the rail lines in the country. Korail (the Korea's rail company) gets some planning and subsidies from the provinces. In Spain, the province of Leon built their own rail system after it became clear that the national government was not going to.

If I were to wager a guess at why, I’d say that users don’t “browse” forms. The interaction style users engage in with forms is different, and requires its own study and design best practices.
study abroad

Was reminded of this when skimming this recently: a CharObs blogger got the mayors of Miami and Seattle pleading to abolish states.

As for transit, I don't know where you guys live, but generally state DOTs funnel money out of metro areas (and by extension urban transit) to gold-plate rural roads. I live in Illinois, which has one of the more extensive state-subsidized Amtrak networks, and it's stupid how the train service to tiny Carbondale is better than the train services to Indianapolis or Madison simply because the latter two are over the state line. Chicago's transit is funded solely by metro Chicago -- and the region's taxes go to pay for all sorts of stupidity downstate: we have potholed bike lanes up here (Milwaukee Ave) that move twice as many people than smooth interstates (I-180) down there.

I do agree with Helen that the USA might be too big of a governing unit to be effective.