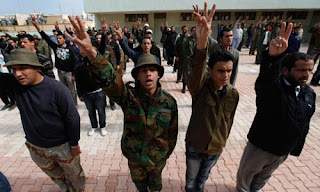 Let me respond to Matt Thompson (via Kevin) and Andrew Exum (via Matt), just because what they're saying was picked up by dissenting voices in my interior monologue before becoming a supporter of the Western intervention to help Libyan rebels. The fact that East Libya was a major source of insurgents causing trouble in Iraq doesn't tell us a whole lot about the rebel movement that mostly comes from there. In particular, there's no reason to conclude from this data that the rebel movement will be virulently anti-Western or that the rebels will start up some kind of awful Al-Qaeda-hosting woman-oppressing government. 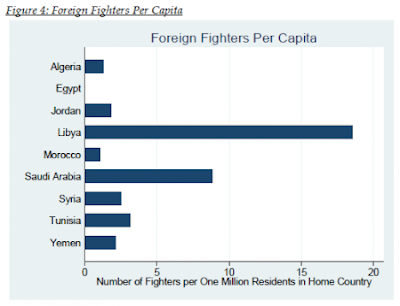 Bear in mind that the raw number of foreign fighters coming to Iraq from Libya was pretty small. Thompson's top chart is nice here -- it points out that you had 18 Libyan foreign fighters in Iraq per million people who live in Libya. Even if they're nearly all East Libyans, that's a hundred guys. I realize that the idea here is to extrapolate from the few who actually make the trip to Iraq to a possible many who have awful political sympathies. But in general it's unwise to extrapolate from a hundred people who do something crazy to the million-plus people from their region, and it's especially unwise here.

Take a look at the diplomatic discussion from Thompson's post, which is available to us thanks to Wikileaks. As a US diplomat recognizes that the insurgency has a lot of East Libyans, suggests that America help to reduce poverty in East Libya, and says after being rebuffed by his Libyan counterpart, "The policy of deliberately impoverishing the east to ensure political quiescence has not worked." East Libya is where the poverty is, because Gadhafi enriches his power base in the West and tries not to let the East get too strong. If you're a thuggish young dude in the West, maybe you become a Gadhafi thug, or if you don't have quite enough thug skills, maybe you get a job serving coffee to Gadhafi's thugs. But in the East there's not enough thug jobs or coffee jobs, so you have nothing to do and you go off to live the thug life in Iraq. But this doesn't tell us much of anything about the political views of East Libyan businesspeople and farmers and moms.

Really, if you want to see what the new government is about, the best way is probably to learn more about the leadership. It's hard to learn more about the NTC, because lots of them got what little internet presence they have from being on the NTC, and others are afraid of being killed if they reveal themselves. I guess the one guy who I should be able to find out more about is Finance Minister Ali Tarhouni, because he actually has papers on SSRN. Maybe I'll do a post on this soon. Oh, and if any of you know what the deal is with that two-finger thing that the rebel trainees are doing in the picture, tell me.
Posted by Neil Sinhababu at 3/26/2011 02:07:00 PM