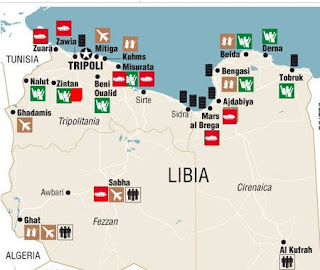 Juan Cole has a lot of credibility with me both because he knows a whole bunch about the Arabic-speaking world and because he was such an intense opponent of the Iraq War. I'd say that he's probably the voice that did the most to make me optimistic about operations in Libya. And he's keeping the optimism going in a post on the achievements of recent Western intervention. The concluding paragraph:

The liberation movement at the moment likely controls about half of Libya’s population, as long as Misrata and Zintan do not fall. It also likely controls about half of the petroleum facilities. If Benghazi can retake Brega and Ra’s Lanouf and Zawiya, Qaddafi soon won’t have gasoline for his tanks or money to pay his mercenaries. Pundits who want this whole thing to be over with in 7 days are being frankly silly. Those who worry about it going on forever are being unrealistic. Those who forget or cannot see the humanitarian achievements already accomplished are being willfully blind.