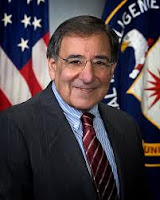 It's good to see that Leon Panetta, as CIA director, is getting some recognition from the success of the operation to kill Osama Bin Laden. While I can't tell if this came before or after Bin Laden's death, former Panetta skeptic Dianne Feinstein is now calling him "the most skilled person in government."

Panetta is Obama's pick for the next Secretary of Defense, and he's the sort of guy who will want to cut the military budget. I'm hoping that cred gained here can be used to eliminate funding for unnecessary weapons systems. Or even better, promote a cheaper and less aggressive global defense posture.
Posted by Neil Sinhababu at 5/03/2011 12:25:00 AM