How The Vegans Will Win 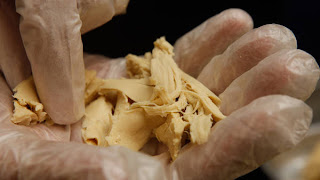 Mark Bittman extols the virtues of the fake chicken, actually made from vegetable products, that he found indistinguishable from the real thing.  As technology progresses in this field, I'm sure we'll get more and more excellent meat substitutes, some of which will be better than real meat, or at least the real meat that people usually eat.  If they can make a good veggie ribeye or filet mignon, why bother buying real versions of the worse cuts?  We're not there yet, but there's no reason to think that with a few decades of scientific progress we won't be.  I don't see reason why the same process can't go forward with a large range of animal-based products, including dairy and egg.

When all of this goes large-scale, we can look forward to veggie meat being cheaper than real meat.  Feeding all the veggie products to an animal and then slaughtering the animal is a highly inefficient way to make food.  You have to put in 10 or so pounds of vegetable matter to make 1 pound of edible meat, though the numbers are different for different animals.  This will give veggie meat and similar products a large price advantage.

Once this process runs its course, we'll have veggie meat that's cheaper and better than the real stuff.  So why would you bother eating real meat?  After a few decades of that, the whole idea of eating real meat will seem like a pointless, wasteful, and cruel atavism.
Posted by Neil Sinhababu at 6/14/2012 04:29:00 PM

Have you read Oryx and Crake by Margaret Atwood? Futuristic fiction which predicts the chemical engineering of vege-based meat on a large industrial scale. Basically arguing that it's only a matter of time...

Once this process runs its course, we'll have veggie meat that's cheaper and better than the real stuff. So why would you bother eating real meat?

Because people are largely irrational and eating real meat will become a culture war thing for conservatives (it already has to some degree).

Ron, I'm talking about something that happens on a time scale of 50-100 years. That's a lot of time for culture war boundaries to be changed by all kinds of unexpected social and technological factors.