John Edwards has been acquitted on one of six charges, with a hung jury on the others.  It appears that he won't be retried.

Despite having been a tremendous Edwards booster from 2004-2008, I wasn't following the trial very closely.  I never had especially strong feelings about John Edwards the human being, or at least, that's not what drove me to support him.  I knew that it was really hard to figure out what skilled politicians are like on the inside -- for the most part, they're actors, and I really had no way of knowing how they and their personal relationships really are.  Never having been all that interested in him personally, I found the whole trial too boring to pay close attention to.  And while I'm not above getting interested in a story about sex, infidelity is the most boring kind of sexual immorality.  If you're going to clog the headlines with your sex scandal, you should have the decency to do something like bestiality or necrophilia so that the rest of us won't be bored to tears. 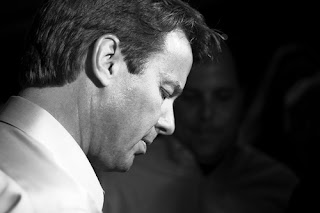 I was enthusiastic about Edwards as a mechanism for political change.  And I've been very happy about the things his candidacy accomplished, and which I may have had some part in accomplishing by promoting him.  He moved the intra-Democratic debate about several major issues substantially leftward, when it mattered.  His health care plan, copied by Hillary Clinton and approved by Max Baucus after the 2008 victory, became the blueprint for the Affordable Care Act.  If he hadn't gone forward so boldly, it's possible that we would've seen the rest of the party coming out with much weaker proposals.  As Yglesias wrote, the day before the ACA was signed:


Edwards served as a useful progressive foil. He was never really up there with Clinton and Obama, but he was always close enough that they couldn’t simply ignore the possibility that his efforts to appeal to the base would work. So when Edwards unveiled his four point plan for achieving universal coverage—a plan based on exactly the pillars of ObamaCare—it made a huge difference and swiftly became the benchmark by which Clinton and Obama were judged...

...Obviously, Edwards was calling for a public option and the bill that passed the House last night doesn’t include one. But as you can see it’s simply not the case that the public option was the core of Edwards’ idea, it was one of a laundry list of subsidiary items to a plan based on the principles of mandated, subsidized, regulated health insurance. Three years ago, few thought it was politically realistic. Tomorrow, it will be signed into law. But the whole thing easily could have never been taken up if not for the pressure Edwards put on others to shift in his direction.

That's why the court case that will ultimately have the biggest impact on how I feel about Edwards is one that the Supreme Court is now deliberating on.  If the ACA is upheld, Edwards' life will have served a tremendous historical purpose, and my support for him will have all been for a great end.  If the ACA is overturned, evaluating him and his political legacy becomes an extraordinarily complicated question that we may never be able to answer.
Posted by Neil Sinhababu at 6/01/2012 10:40:00 AM

Very well put Neil, I couldn't have said it better myself about Edwards.

Exactly how I always related to Edwards. The pretty white guy was selling what the country needed, regardless ...