John Allison Running Cato. Is The Ayn Rand Guy Better Than The Kochs? 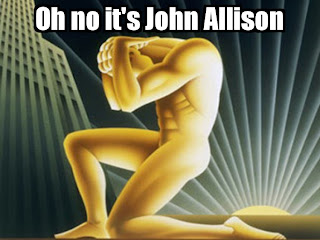 Dave Weigel explains how the Koch brothers' settlement with Cato played out.  Ed Crane, who's been Cato's president for the last 35 years, would step down. The Koch brothers wouldn't dominate the think tank by virtue of their controlling the most shares -- that shareholder structure would end.  Cato's new president would be...former BB&T Chief Executive John Allison.

This isn't the first I'd heard of him. He's infamous for offering schools large amounts of money to put Ayn Rand books on the philosophy curriculum. Robert Nozick, Friedrich von Hayek, and Adam Smith would all fit nicely into a course at the intersection of business ethics and political philosophy, and I agree with some of their insights. If I teach such a course sometime, I'm likely to put them on the reading list. But philosophers find Rand to be more a writer of bad novels than a source of well-reasoned arguments, which is why she only appears on the curriculum if Allison is buying the curriculum at an otherwise poorly funded university.

There's plenty of issues on which I agree with a generally libertarian political philosophy. I think the Wars On Terror And Drugs have gone out of control and become self-destructive. Cato has been on the right side of those issues, and wants to reduce defense spending, which I like. Matt Yglesias has brought me around to a libertarian position on lots of local laws including height restrictions on buildings, mandatory parking minimums, and other regulations that impede the development of affordable housing and energy-efficient transportation infrastructure in urban areas. I like a lot of things that the Institute for Justice does. Like any good liberal, I'm a strong supporter of a women's right to choose what purposes her uterus is put to and a gay man's right to choose what he does with various parts of himself in a consensual relationship.  (Unfortunately Cato tends to underestimate the significance of these, especially abortion.) I enjoy talking with my libertarian colleague Kyle Swan at NUS, who has a keen eye for situations where government policy is wasteful or can be manipulated by rich people and corporations to generate socially suboptimal outcomes. I'd welcome stronger libertarian voices on these and other parts of their political philosophy which don't get enough play in political discourse.

But I don't see that, or anything like it, as what we're getting. The Kochs wanted Cato to be a narrowly partisan organization.  I'm worried that Allison doesn't see Cato as more than an institution for the promotion of economic royalism -- justifying the victories of the biggest winners. There's a lot more to libertarianism than that, and lots of libertarian insights aren't congenial to an economic royalist's point of view. Maybe he'll surprise me, but his past inability to move even from crude and unsophisticated defenses of capitalism to sophisticated ones doesn't bode well. And I don't have any indication that he's interested in much else.

I agree with you re:

"... situations where government policy is wasteful or can be manipulated by rich people and corporations to generate socially suboptimal outcomes. I'd welcome stronger libertarian voices on these and other parts of their political philosophy which don't get enough play in political discourse."

I'm a very recent student of the libertarian-"Atlas Shrugged" discussion. Just watched an Ayn Rand documentary and saw the ATLAS SHRUGGED film which was so cartoon'sh, un-smart and overtly manipulative that I found myself laughing aloud many times, even watching it alone.

I was definitely left with the impression that today's corporatist and political cronies who greedily misuse government are far from being the Ayn Rand heroes, despite their protestations that govt should not "pick winners."

The Kochs and Paul Ryan--who support subsidies and take govt contracts-- would be VILLAINS in an Ayn Rand novel.