Thanks to Monica Potts, TBogg, Scott Lemieux, and everyone else who liked my post describing how things wouldn't have gone as well for me if I'd tried to follow Ross Douthat's ideal of monogamy. Especially as the post went into a bunch of personal details of my life, I appreciate the warm response. 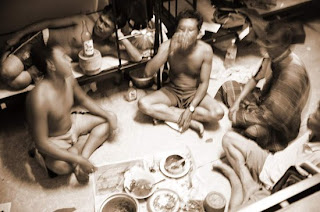 As I mentioned, I spent yesterday evening with my girlfriend. She knows a lot of Thai migrant workers who came to Singapore to do construction jobs. (This was related to her Masters' research -- she also lived in Thailand for a few years and speaks Thai fluently.) Last night she was telling me about the ways migrant worker couples deal with separation. Some couples are constantly anxious about infidelity. One of the guys she knows suspects that his wife back in the village is having an affair. He had an affair himself a few years ago, and my girlfriend was telling him that he should just accept it and work out an arrangement with his wife. He seemed personally open to the idea, but was very embarrassed about how people on the village would regard him if he did that.

Other couples do make these sorts of arrangements -- one wife packed condoms in her husband's suitcase before he flew back to Singapore.

One response that came up a couple times in comments to the original post was that we should prefer economic arrangements that don't require people to move around like migrant workers or me. That sounds good! But pushing monogamy first before we know what kind of economy we're getting into is a completely backwards way to do these things. If people will have to live apart, giving them ideals they can't satisfy that way is going to be a very bad idea.

Some values will lead you to a good life no matter what kind of economic situation you're in -- for example, caring about the other person's well-being and respecting their choices. These are the ones I'd be more interested in promoting.
Posted by Neil Sinhababu at 3/08/2011 10:41:00 PM

I don't think everyone could handle these kinds of arrangements, though. I know I couldn't, nor could my husband. If one member of a married couple even brought that up, it might be devastating to the other person who is definitely NOT on board. Also, what if despite everyone's best efforts, a child results? It happens, and not everyone is comfortable with the idea of abortion, even if they respect that as someone else's choice.

I think that's right when applied to the circumstances conducive to monogamy, Mary. I guess the point I'm making is specific to migrant worker couples who are apart most of the time, and people like them. In those circumstances, if the idea is devastating, that itself may be a sign that we're a bit too invested in monogamy for our own good, from the beginning.