You Can Hurt A Campaign With Gaffes If You're Sarah Palin

I've mostly been converted to the Douglas Hibbs view of what wins elections -- it's all about raising people's real income over the last year and not getting too many of our fighting boys and girls killed in war. How well does this simple two-factor model predict election outcomes? Pretty darn well -- see the graph at right. The two biggest outliers, 1996 and 2000, look less problematic if you recognize the influence of third party candidates. Give Nader's 3 points to Gore in 2000 and of Perot's 8% to Dole in 1996, and things look really tight. So I agree with Yglesias and Bernstein on the general point they're making (gaffes by candidates aren't that big a deal), and on the specific issue of whether Huckabee's 'Obama grew up in Kenya' gaffe will hurt him (it won't). By the way, you can click on any of the graphs in this post to see them in larger form.

Let me speak for the other side a little, though. If your gaffes are so horrendous (and/or your damage control is so crappy, and/or your enemies are so effective) that they can turn you into a 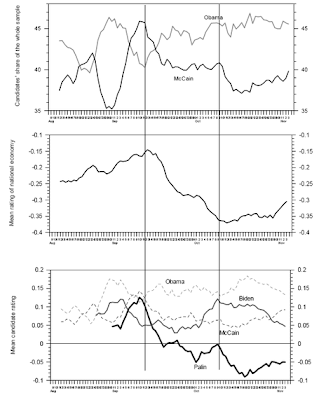 complete joke to swing voters, they can hurt you. And this is where Sarah Palin is right that the usual rules of politics don't apply to her -- she's one of the few people disastrous enough to sink a presidential campaign.

At left I've got the graph by Richard Johnston and Emily Thorson showing Sarah Palin's influence on the 2008 election. (Some of you will have seen this a year or two back.) The top chart is the Obama ticket versus the McCain ticket, the middle chart is of people's ratings of the economy, and the bottom chart is of how people rated all 4 candidates with Sarah Palin in bold. The second vertical line that they've drawn through the graphs is a pretty amazing one -- that's where McCain's share of the vote in the polling averages begins to drop about 4%, even as opinions about the economy and McCain himself hang steady. What changes? People achieve their maximum level of horror at Sarah Palin, and she loses nearly 10 favorability points.

So: elections are mostly about the economy, but candidates can hurt themselves with a series of horrible gaffes if they're as ridiculous as Sarah Palin.
Posted by Neil Sinhababu at 3/03/2011 11:11:00 AM

Also too while general elections are largely determined by the economy, gaffes can very well kill a candidate in the primaries. Of course that assumes that the primary electorate perceives what happens as a gaffe. I tend to think what Huckabee said this week probably actually helped his chances to win the primary since it's already a matter of faith among the hardcore conservatives who will vote in Iowa, etc. that Obama is an alien Muslim socialist.

I think a lot of the close fit of the data to the model has to do with a survivorship bias - that candidates who are so gaffe prone or whose damage control is so poor don't survive primaries. This obviously matters if a) a primary electorate doesn't punish a candidate for being gaffe prone or b) a gaffe prone candidate manages to survive a primary where support is divided among many candidates.

Both of those scenarios are, in my opinion, more likely with the GOP field in 2012 than in past elections both because of the lack of a clear front-runner and because of the radicalization of the primary electorate.