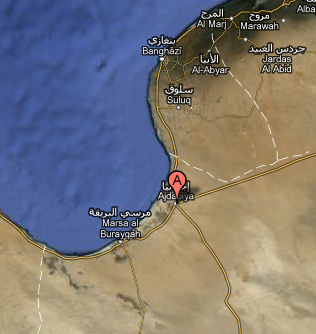 With the help of international air support, Libyan rebels have retaken Ajdabiya from Gadhafi.

The strategic significance of this victory is partly depicted in the map at right. The only major road going from Banghazi to Tripoli (which is west of the depicted region, along the coast) is through Ajdabiya. In fact, if you go due south of Ajdabiya, Google Maps doesn't display another road at this level of resolution in the rest of Libya. So this dramatically enhances the ability of the rebels to control territory in North Libya, which is where the vast majority of people live. The rest of the country is mostly empty -- it's the Sahara Desert. Also, Ajdabiya is an oil town.

The Libyan endgame I imagine is one in which victories like this continue until Gadhafi has little more than Tripoli. At that point (if not before), the entities in Libya that care most about being on the winning side will join the liberation movement. As Juan Cole writes, "The million-strong Warfalla tribe appears to have flipped allegiance twice already in the past month and could easily do so again. The tendency to quick switches in allegiance also make it less important that the rebels have so few trained troops."

That last bit, I think, is a good response to Kevin Drum and others who worry that rebel forces are in trouble because right now they have only a thousand trained soldiers. Libya is a momentum game in which more people join your side as you win more. We saw this earlier when it looked like the rebels were going to win in an Egypt-style popular uprising, and then Gadhafi looked like he was going to brutally crush the rebel movement with tanks and bombs and massacres. (I think those were the two Warfalla switch moments.) Right now there's a likely path to rebel victory, and it's hard to see what cards Gadhafi could possibly play to switch the momentum back to him.
Posted by Neil Sinhababu at 3/26/2011 12:59:00 PM

Libyan forces will not do anything against rebels and also they cant fighth with rebels until NATO Forces in behind them so this is waste of the time to fight with rebels and against NATO forces. Within a few weeks the NATO forces & rebels will win the fight.