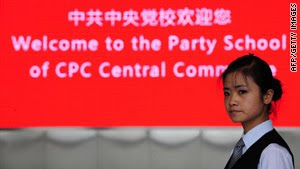 Last week a bunch of my Singaporean colleagues were criticizing people who graduated from party schools. By this they were referring to Chinese colleges that train future Communist Party leaders and functionaries. For example, there's one that seems to be called the "Central Party School of the Communist Party of China." Apparently the Chinese 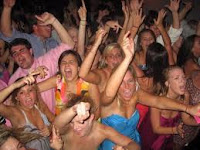 The American usage of the term, of course, is different. I'm sure that if we brought the graduates of Chinese and American party schools together, it'd be a cultural revolution for everyone.
Posted by Neil Sinhababu at 3/06/2011 06:53:00 AM

But what on earth does 'dogmatic defenders of orthodox communist views' even mean in the context of present day China? Do government officials actually go around claiming that their system has anything to do with Karl Marx?

Interesting question, Rick, and I'll ask my colleagues. I suppose it's not that particular orthodox communist view, but whatever the current party orthodoxy down there is.

And there used to be "the party boys called the Krem-e-lin" but that party school folded a few years back, I hear.

I was once talking to a professor who had spent some time in Laos, and he remarked that officially Laos was still a "People's Democratic Republic."

"What in the world does that mean nowadays?" I asked.

"Well," he explained, "in the bad old days under capitalism, multinational corporations would bribe the military rulers to allow them to come destroy the environment and exploit the workers. But now that it's a worker's state, the bribes have to go through the Ministry of Labor."

I just talked to my department chair. She says that the Chinese strain of communism gets more from Engels than from Marx, and then there's heavy influence from Mao himself. On top of that there's probably a bunch of contemporary scholars putting their own spin on things.

I don't know exactly what the significance of this is, because I don't know much about those other guys and know a lot more about Marx himself.

I currently work at a Chinese university. My students NEVER drink. I think I'll start paying them 20 kuai to show up with a hangover: they should really learn to live a little.

BTW I like the joke, Jeffrey! I guess there actually be a before / after difference depending on whether the money taken in by the ministry of labor actually gets used for some socially beneficial purposes.

Singaporean students are similar, anonymous. And when they do drink they're very well behaved.

Unfortunately I don't really know all that much about Marx, come to think about it.

Which still leaves me wondering how (and why!) modern Chinese government officials can relate their system to anything 'Communist,' even by the broadest understanding of that term.

The name of the Holy Roman Empire seems precisely literal by comparison.