This, from cvillenewscom on twitter, is really something.  When you look at the "General Info" box of University of Virginia Rector Helen Dragas' June 21 statement explaining the dismissal of popular President Teresa Sullivan, the "author" field doesn't have Dragas' name on it.  Instead, it has "John Ullyot".  You can download the file here, from the Richmond, VA Times-Dispatch and see for yourself.  (On a PC, it'll probably be called "Properties").  Here it is as I saw it: 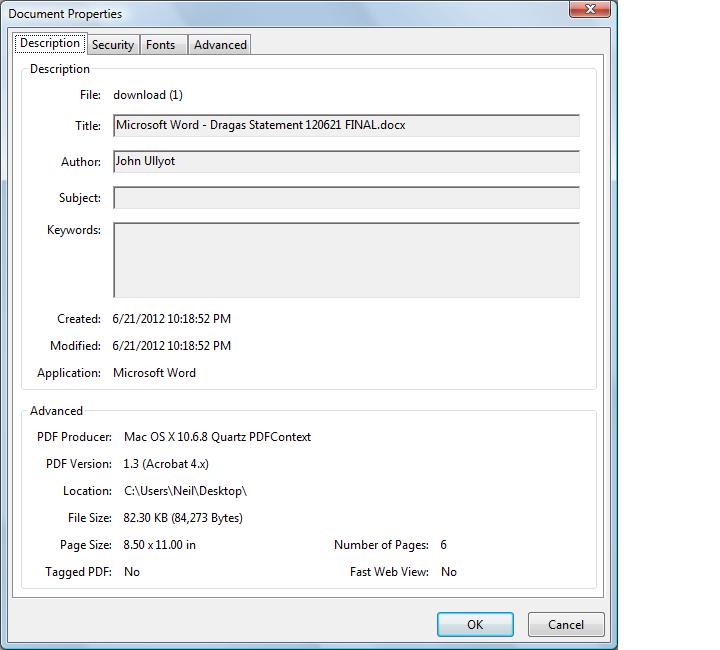 So who's John Ullyot?  A Senior Vice President for Media Relations and Issues Management at PR firm Hill & Knowlton, which has in the past taken on clients including the tobacco industry and the Church of Scientology.  He's also gone on Fox News and CNN as a "Republican Strategist".  He doesn't appear to have any especially strong connection to the University of Virginia community, having done his undergrad degree at Harvard and then gone to the Marine Corps.  He was a high-level staffer for Virginia Republican Senator John Warner, though.

So what just happened here?  It looks like Helen Dragas' statement justifying Sullivan's firing, and explaining how it fit into a larger vision for the University, was actually put together by an external PR firm that's happy to take on all kinds of sinister clients.  Those who were worried about a takeover by outside forces that don't understand or care about how to build a good University will find their suspicions confirmed.
Posted by Neil Sinhababu at 6/21/2012 11:56:00 PM

Some news articles have said that Hill+Knowlton released Dragas's statement (e.g. http://bit.ly/MJACIi). It's possible (likely in my view) that the statement was drafted by Dragas, some of her allies, and Ullyot over email, then put into a pdf by Ullyot to send to press contacts, which would explain why he was listed as author in the metadata. If something like that's what happened, it wouldn't be accurate to say that Ullyot "wrote" the statement. Additional support for this theory: unlike Dragas's earlier statement, which was pure PR bullshit, this one is substantive, full of business jargon, and sometimes awkward. I'm betting that it really does reflect Dragas's thinking pretty accurately, even if the PR guy helped write it.

That makes sense, Geoff. I really don't know how significant Hill+Knowlton's involvement in this is.

It's interesting, though, that the more substantive statement is the one with the PR guy's name in the metadata. Maybe (as I think you're suggesting) he also wrote the other one, with less influence from Dragas, but he covered his tracks better. The really weird possibility is that maybe this is the first one he wrote, and a clever PR hack can concoct a more suitable statement than the UVa Rector.

At any rate, there's no good reason for the Rector to bring a PR firm into this. The sort of people who ought to be in charge of a university should be able to explain their decisions without that kind of help.

I agree with your last sentence 100%, Neil. Also, the sort of people who ought to be VP's at fancy PR firms should be able to take their names out the file properties. That's only one among many reasons I think Ullyot would be well advised not to list this particular project on his resume!

If you look at the comments page in the student newspaper's reporting, UVA students picked up on this right away.

Apparently the letter is full of mistakes in referring to places at UVA and ideas about UVA that no one who goes to school there or works there would make.