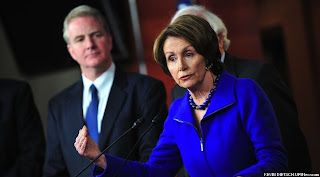 Obviously, everyone and their cats are nervous about whether the Supreme Court gets things right, or whether 4.7 of the 9 justices just do what Rush Limbaugh says.  Dahlia Lithwick and Scott Lemieux would be on shaky ground in making Pelosi's argument, because they're trying to correctly predict what will happen.  Pelosi isn't really trying to do that.  There's really nothing gained by being a correct predictor here.  What she needs to do is use her time in front of the microphone to assert utter confidence in the constitutionality of health care reform.  All the better to respond with fury if the court decides otherwise.  She was betrayed by an American institution that she did her best to believe in.

i think it is not only the right thing to say, but that she is correct.