Job Creation Is The Fed's Job 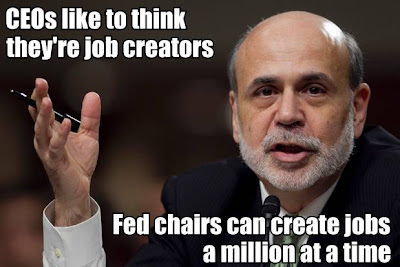 I don't know who exactly it was who introduced the term "job creator" into our political lexicon, but the idea that CEOs fit that description was always silly.  The CEO's fiduciary responsibility is to maximize shareholder value.  If the way to do that is by firing everybody, selling the assets, and sending the money to shareholders as a big dividend check, that's what the CEO's job description tells him to do.

Whose responsibility is it to create jobs? The Chairman of the Federal Reserve. That's half of the Fed's dual mandate -- the other half is to prevent runaway inflation.  And the Fed has the tools to do so, in its ability to set interest rates, buy trillions of dollars of bonds, and communicate long-term plans about those actions if it so pleases.  So if you're in an economy where there's massive unemployment and very little inflation, as you are, the Federal Reserve is to blame.  (Or if you're in Europe, it's the European Central Bank.)  There's also plenty of room to blame fiscal policymakers like Senators and the President, but no one person has as much power over job creation as the Fed chair.
Posted by Neil Sinhababu at 6/12/2012 01:01:00 AM

What is the Fed Chair able to do without the rest of the FOMC?

They say the FOMC operates on consensus, but obviously there are disagreements between members all the time. In practice, Chair have always listened to FOMC governors. But I've never seen a report where the Fed Chair's view was in the minority and he acceded to the majority's will, and my impression is that there's no way of stopping a sufficiently strong-willed chair from doing what he wishes, at least in the short term.

The term " Job Creator" was invented by Frank Luntz,
http://en.wikipedia.org/wiki/Frank_Luntz

"Job creator" is an attempt to give personality to trickle-down economic theory. Job creators never have to worry their heads about demand; they are concerned only with the supply side.

I hope that David Stockman feels at least a twinge of guilt now and then.