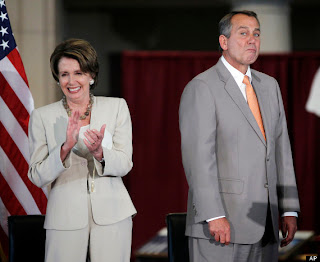 Due to travel and laptop repair, I wasn't on the blog for the ACA's victory in the Supreme Court. Thanks to Nick for filling the gap here -- I'm liking the Verilli meme.  Some thoughts on the good news.

-I'm loving this picture, from after the decision was announced. If health care reform has a mother, it's Nancy Pelosi, and she deserves to smile every millimeter of that smile.

-There was some talk before the decision about how the defeat of the ACA would lead to single-payer. Maybe, eventually. But maybe not. We've needed universal health care for decades, and we haven't got it. Our political system doesn't always deliver the solutions the country needs. There's also an outcome where Republican filibusters and our veto-point-laden system keep anything useful from passing, health care costs destroy the American economy, and we end up in some kind of weird futuristic dystopia.

-That it was Roberts and not Kennedy who provided the deciding vote bodes well for the future. Kennedy is 75 years old and might leave the bench as early as the next presidential term. We're probably stuck with the 57-year-old Roberts for a while, so it's good to see him being reasonable.

-Via Scott Lemieux, Paul Campos discusses the evidence that Roberts joined up with the good guys late in the game. That's why the Ginsburg opinion is referred to by the anti-ACA side as "the dissent" rather than a concurrence with the majority. What's weird about this is that Roberts somehow managed to switch to the pro-ACA side and write the majority opinion really fast. If I'm getting this right, he got an opinion out so quickly that the other side didn't have time to correct their opinion and stop calling Ginsburg's opinion the dissent. I guess it's also possible that the conservatives left it in intentionally, to let everybody know what Roberts did.

-The indispensable Scott Lemieux has nice quotes from the Ginsburg concurrence.
-I like how it's being called "Obamacare" by mainstream outlets. I supported the bill and I'm optimistic that it'll turn out well. Then we'll have the name of a Democratic president attached to a good policy. I imagine that it'd be nice for Democrats if we could've gotten Medicare and Social Security to be called LBJcare and FDRdollars or something, so everybody knows who made them.

-Thanks to John Roberts, I can be proud of having volunteered for John Edwards.

A Former appellate court clerk had an excellent conjecture, including how the majority opinion came to be:

I imagine the dissenters either had Roberts's vote or that Roberts left the post argument conference without commiting to a side and saying something to the effect of "let me see how it writes." He certainly didn't trust the dissenters, as he clearly instructed his law clerks to begin working on an alternative majority opinion (the final product was too polished and too long to have been written at the last minute). And he waited to see what was written.

Interesting thought regarding the propaganda value of "Obamacare." I'm fairly sure that the term originated on the right to denigrate the reform. As I understand it, this stems from the perceived success of the "Hillarycare" epithet in 1994. (If only we still had Bill Safire around to trace the exact history of the usage). If the term ends up being a political boon for the Dems, that will be an ironic result.