Collin Peterson: A Democrat Worth Losing? 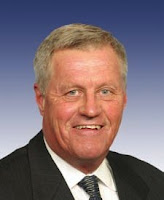 Conditions where I'd like to see a Republican defeat a Democrat in the US House are pretty rare. But looking at Matt's post on Minnesota's Collin Peterson, the chairman of the House Agricultural Committee who is blocking climate change legislation, I'm thinking that he's the sort of Democrat whom I'd like to see beaten by a Republican in the next election. Sure, the Republican would probably be insane, but the Agricultural Committee chair would then pass over to someone who doesn't think, in direct contradiction to the NOAA's estimates, that climate change is a good thing that will help farmers achieve greater crop yields.

The next chair might be Ag Committee Vice Chair Tim Holden of Pennsylvania, who isn't anybody's lefty dream, but who at least supports the Kyoto protocols (which Peterson opposes.) There's also the off chance that some kind of Waxmania goes off and we get a surprise lefty chairman, but I have no idea whether that's possible. Especially on a relatively conservative committee like Agriculture, it would probably be harder to get.

Peterson is a pretty terrible Democrat down the line. He has a 0% NARAL rating, was one of the seven who voted against Obama's stimulus plan, and was one of the founding Blue Dogs. Guys like this are far enough to the right that they only vote with us when we don't need them. If the House were in jeopardy, we'd need him for a variety of purposes, but that's not our current situation.

Unfortunately, Peterson has won re-election in his last several contests by pretty huge margins, even in the conservative 7th district. If there's an available primary challenger from the area, I'd love to have someone to give money to.
Posted by Neil Sinhababu at 6/18/2009 06:07:00 AM

Tell us where to send $$$ please, I'll contribute to beating this guy.