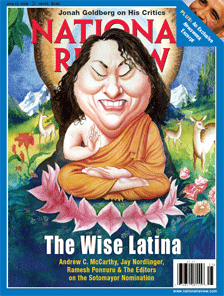 A lot of people -- Cara at Feministe, Jesse Taylor at Pandagon, Ann Friedman at Feministing, Matthew Yglesias at, um, Matthew Yglesias, and I guess Brad DeLong at Brad DeLong, -- have interesting comments on the racial aspects of the National Review's Sotomayor cover. What struck many of them, in different ways, was the portrayal of Sotomayor as Asian, just another one of those funny-colored people who all look the same.

Something like that is certainly in there, but the way I see the joke actually depends on incongruities between the stereotypes of the nonwhite ethnicities involved. The Buddha-like pose and Asian features are tied to lofty pretensions of sagelike wisdom. And what sort of person is it who's pretending to be some kind of sage? A Hispanic woman! As if.

The in-joke in this cover is for people who have already internalized a stereotype of Hispanic women as hotheaded and not that bright. Put one of them in the Buddha suit, and if you've absorbed the right racist stereotypes, the incongruity is hilarious.
Posted by Neil Sinhababu at 6/06/2009 12:32:00 PM

The joke is that she claimed a unique wisdom for herself based upon being a Latina woman.

What is more sexist and rascist than that?

If you want to know how a white guy thinks imagine this: Take the subject of the sentence and substitute "white man." OK?

Now if that offends you, then you (or in this case she) should not say it and in this case its an over the top BS statement.

In terms of potraying her as Buddha, as a Buddhist I think its mildly ridiculous but then again I'm not a fanatic, race driven collectivist like most Americans.