Facepalm update: Oh dear. I've made a terrible error in calculating premiums under alternative scenarios; I've assumed everyone in every income bracket is buying a family based policy. This is wrong, and because of the way I calculated premiums, it means that the "Baucuscare, w/House funding ..." alternative scenarios have higher premiums for those earning 200%-300% of FPL than they actually would under those scenarios. Instead of $90/month in higher subsidies, a family of four would see at least $290 in higher subsidies with $1.2T of funding. Still, even with these adjustments, which are now reflected in the chart, the House alternatives are noticeably more expensive than the Massachusetts plan. Funding above and beyond the $1.04 trillion that HR 3200 contemplates still doesn't get subsidies to Massachusetts levels.
First, let's list the people who will be much better off under Baucuscare than they currently are. Remember, keep the flowchart in mind:
Now, with that aside, let's think about the 25 million people who are currently uninsured earning between 133% and 300% of FPL, and the monthly payment they'll face. We can make a direct comparison between the Baucus spreadsheet and the Commonwealth Care premium schedule. Cost sharing is actually about the same in these plans, so the quality of insurance is roughly equivalent. In addition, let's some two alternative scenarios. In one, we'll use the House level of funding ($1.04T as opposed to 880B), and dedicate all of the money to lowering premiums for middle-income households, dividing it equally among all households between 133% and 300% of FPL. In the other alternative, we'll use the House level of funding, but tilt the spending towards lower-income households. We'll also show what would happen if we managed to boost funding to $1.2 T, a full $160 billion more than the House bill contemplates: 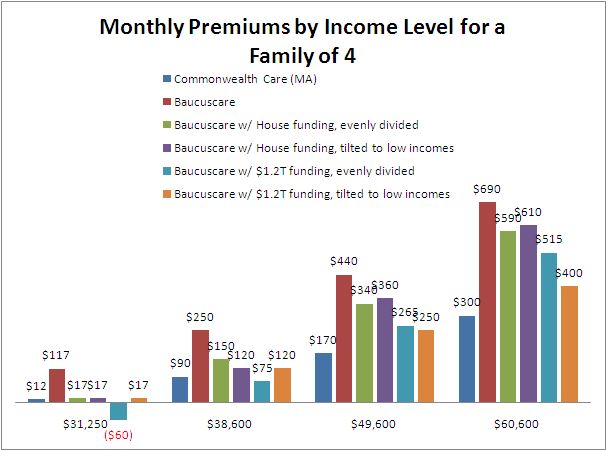 People in Massaschusetts are by and large satisfied with the Connector. It's toughest on the fairly small number of families earning just over 300% of FPL (of which there aren't that many), and on the larger number of young individuals who make just over 300% of FPL (which is $32,320 for an individual, so there are a decent number of those folks). Working class families earning up to 200% of FPL have fairly low premiums. $90 per month is going to pinch, but for uninsured households, they'll get some real value out of that: Commonwealth Care plans include dental insurance, wellness checkups have low co-payments; chronic disease care is especially well covered, and so forth. Likewise, three hundred pre-tax dollars a month for a family with a gross income of $60,000 per year is Real Money, but it's not going to break the bank. It's less than what they should be saving for college, for instance.

But as you can see from the graph, the Baucus bill doesn't fare as well. It's not even close to faring as well. The eight million individuals without insurance who earn between 200% and 300% of FPL will pay more than twice what similar households in Massachusetts currently pay. And working class families will feel a real pinch; $250 per month ($3,000 per year) for a family of four with an income of $38,000 is going to hurt. (This paragraph was edited for clarity)

The alternative scenarios are not quite as bad. I especially like the purple orange scenario, using funding levels higher than the House bill to push premiums down primarily for working-class households. That would be almost as good as what Massachusetts has. And politically it would probably be fairly popular.

I'm having quite a bit of difficulty with meaning of "affordable" as it is being discussed in this and other analyses of the Baucus proposal.


Just as insurance does equal care, premiums are not equivalent to cost. Affordable healthcare should mean that the cost of treatment is within the means of the patient. Where are these people supposed to get the money to pay for actual care after laying out so much on premiums?

A recent Kaiser Foundation report about the Massachusetts experience noted 17% of those with insurance could not afford to get care and 26% had incurred medical debt.

What is the purpose of "reform" if not to improve the ability of individuals to get care when they need it and not face financial instability when they get it? Delivering a captive market to for-profit insurance companies may help the insurance companies but it's really just cost shifting. It does nothing about the underlying problems
that are bankrupting individuals and all levels of government.

Can you send me a link to that KFF study? I would be interested to read it.

Here's a study I found at KFF that Messenia may have meant: CONSUMERS’ EXPERIENCE IN MASSACHUSETTS: LESSONS FOR NATIONAL HEALTH REFORM, SEPTEMBER 2009 :

"In 2008, 17 percent of non-elderly Massachusetts
adults with incomes under 300 percent of FPL did not get needed care because of costs, and 26 percent had medical debt." (Note: slightly different figures are cited in the introduction.)

I suppose one response is that most reforms will leave some with no net improvement; maybe I misunderstand M, but it's not clear that people in such situations (usu low income, bad employer plan with relatively high deductibles, copays, +/or premiums) are worse off than before the Connector/Commonwealth plan.

I'm also not sure what happens to the Connector plan when/if national health care plan ((Baucus + HR3200)/2) is passed; does your chart illustrate how people would automatically become worse off, or how they would ignore the federal plan in favor of the Massachusetts one?