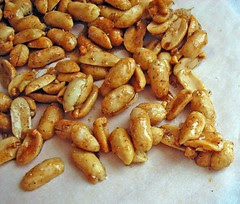 By tapping the $28 billion surplus for subsidies.

In other words, Max Baucus has decided to throw the affordability crowd a few peanuts. Split evenly among the 31 million subsidized individuals in the exchange, over the five years that the exchange is operative, this would provide enough money to reduce premiums by $16/month per individual or about $32/month per family. Applied only to lower-income households, it barely provides enough revenue to get everyone between 133% and 150% of FPL down to Massachusetts-level premiums of $5-15/month. I don't think this will fool Jay Rockefeller. Update: The NYT has Baucus claiming this will be able to shrink premiums by 1% of income, which is $50 for a family of four at 300% of FPL (around $66,000 for a family of 4). We'd still need about four or five times that much money to make insurance truly affordable.

The bottom line continues to be that there's not enough revenue in the Baucus bill for insurance to be an affordable expense for anyone. You really need another $50-$60 billion/year to get premiums down to an affordable level. The best way to get that is by using existing health care dollars more efficiently, but the CBO doesn't want to score those savings. Applying the CAP failsafes to force the CBO to see some or all of those savings is the easiest way to save the largest amount of money. Combine that with Rockefeller's proposal to scale back itemized deductions, an increase on the excise tax on alcohol (which would improve public health and reduce crime) or start taxing Coke , and you probably have enough offsets to make things affordable.