Here's an obvious point given a haircut and dressed in a lab coat: if you waterboard people or put them under extremely stressful interrogations, you screw with their brain functioning so that they're much more likely to misremember things. It's now a paper in a psychology journal.

The methods could even have caused the suspects to create — and believe — false memories, contends the paper, which scrutinizes the techniques used by the CIA under the Bush administration through the lens of neurobiology. It suggests the methods are actually counterproductive, no matter how much suspects might eventually say.

"Solid scientific evidence on how repeated and extreme stress and pain affect memory and executive functions (such as planning or forming intentions) suggests these techniques are unlikely to do anything other than the opposite of that intended by coercive or enhanced interrogation," according to the paper in the scientific journal Trends in Cognitive Sciences. 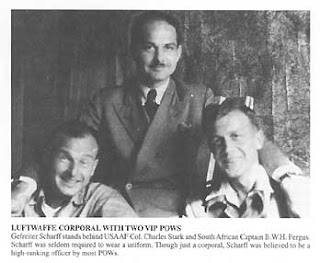 And that's still too generous to the interrogators. Ignorance of the relevant science is not at the root of the problems here. As the CIA knows, waterboarding produces false confessions, and that's what our interrogators were after. People with a serious interest in getting at the truth instead follow the path of Germany's best interrogator during WWII, Hanns Scharff, and befriend their prisoners so that they end up giving the best information they can of their own free will. Torture is what you get from Stalin's Russia or the Spanish Inquisition -- groups that aren't interested in the truth, but in confessions that make good propaganda. In our case, US interrogators were looking for a way to justify attacking Iraq.

Just looking at the news article, the only disagreement I think I'd have with Shane O'Mara's paper is its claim that the torture methods were grounded in folk psychology of ordinary people rather than well-researched scientific psychology. Commonsense folk psychology tells you that people who want the torture to stop will say anything to end their pain, and that their confessions aren't going to guide you to the truth. Thomas Hobbes got this right a couple centuries before they built MRI machines:

Also accusations upon torture are not to be reputed as testimonies. For torture is to be used but as means of conjecture, and light, in the further examination and search of truth: and what is in that case confessed tendeth to the ease of him that is tortured, not to the informing of the torturers, and therefore ought not to have the credit of a sufficient testimony.