Baucuscare Blunders, Part I: Pricing for the Middle Class

Update: thinking about this a bit more, the fact that health care expenditures are deductible makes Baucus care somewhat less expensive than this chart suggests. Depending on the effective income tax burden of a family making $66,000, Baucuscare may be less expensive than Catholic school or even a car. Still, it's a major new expense.

I've previously argued that we should think about the out-of-pocket expenses for health insurance relative to other major expenses facing the middle class. So, now that Jon Cohn has tracked down a spreadsheet making the rounds among Baucus' acolytes, let's do some comparisons. Remember, we're thinking of a family of four—two adults and two children—with a pre-tax household income of $66,000 that is currently uninsured, keeping in mind that most households with this income level already have insurance:


And for the visual learners out there: 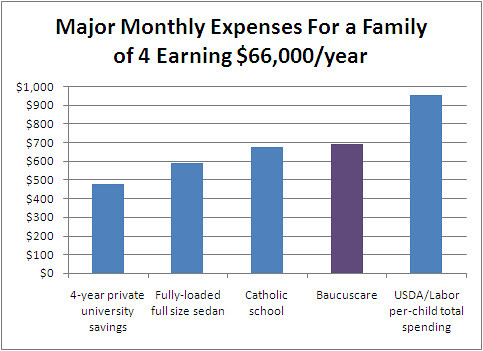 So, there you have it: for middle-income households that currently don't have insurance (roughly 12 million people between 200% and 400% of FPL) insuring the entire family will slightly more expensive than saving for a child's college years. It will be about the same price as owning another fairly nice car (once you consider gas & insurance costs), or sending a kid to Catholic school. And it will be slightly less expensive than having another child. These are things middle-income households currently do; they may not do all of them, but they frequently do at least one. If Baucuscare passes as currently written, it will add another major expense for uninsured middle income households (did I mention, most people at this income level already have insurance)?

This will have a real impact on American society. Fewer people will declare bankruptcy because of health care expenses. But several million middle-income Americans will now be less likely to buy fully-loaded Toyota Camrys and more likely to buy zero-options Subaru Outbacks. Or they will live in somewhat smaller homes. Or they will spend lots of time thinking about how to live in a decently priced neighborhood with decent public schools rather than send their children to Catholic school. More parents will ask their teenage children to hold down jobs to help save money for college, end up with kids who have more student loans, or simply not send their children to college at all. More families will decide to have one child instead of two, or two instead of three.

Since I've repeated several times the fact that most people at this income level already have insurance, it's worth pointing out that people at this income level already buying insurance on the private individual market will be made better off by Baucuscare. They will suddenly find themselves paying less for insurance. Or they will pay the same amount, but they will have better insurance. Between 300% and 400% of poverty, there are as many people on the private nongroup market as there are who are uninsured. Between 200% and 300% of FPL, three times as many are uninsured as are in the private nongroup market.

This is an interesting way of visualizing the expenses. Thanks for posting.