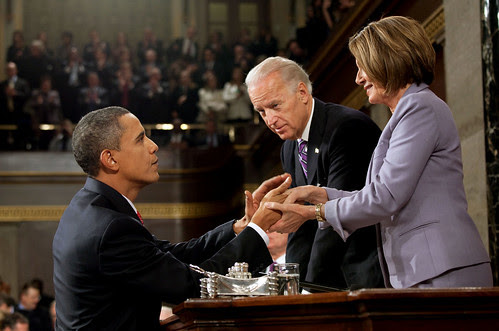 Original Caption: "President Barack Obama shakes hands with Vice President Joe Biden and Speaker of the House Nancy Pelosi at the conclusion of his State of the Union address, Jan. 27, 2010. (Official White House Photo by Pete Souza)"
In honor of the President's admonition to House & Senate Democrats not to run for the hills, here's blindz0r with an FC of the Iron Maiden's "Run To The Hills"—the cover version from the original Rock Band. Apologies for the Cookie Monster metal at the beginning.

Do jog over to Judicial Watch and read the latest on Pelosi's plane expenses. Her actions and attitude is indefensible.

Obama to Pelosi, "Pass the damn bill or next year you'll be watching from the seats down below as I shake Speaker Boehner's hand."