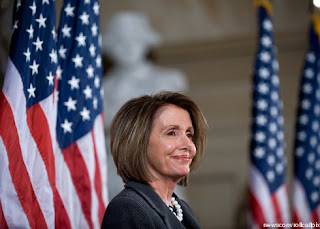 Regular readers will know that I'm with Paul Waldman on this: I'll be much more optimistic if Nancy Pelosi is still in charge of the House Democrats after this election. I don't know why she wouldn't be, but I keep hearing that there's some uncertainty about this so maybe it's worth commenting on.

I haven't heard any serious rumblings about people within the caucus wanting her to go, for good reason -- she's led them more or less flawlessly ever since she took power the dark days of mid-November 2004 when it looked like everything was going to hell. From defeating Social Security privatization, to using Jack Murtha to turn the Democrats into a firmly antiwar party over the objections of Hoyer and Emanuel, to leading us through two elections where we made big gains in the House, to the amazing amount of stuff we got through the House this year, she could very well be the most impressive American politician of my lifetime.
Posted by Neil Sinhababu at 11/02/2010 11:24:00 AM