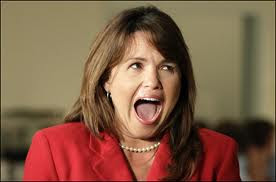 I'm very happy to see Harry Reid win re-election in Nevada and Chris Coons get to the Senate from Delaware. Colorado remains incredibly close, and it's possible that Michael Bennet, who seems to be a good reform-minded Democratic Senator, will pull out the victory there. That's two or three Senate seats which the Tea Party gave to Democrats by nominating bad candidates.

If popular centrist Mike Castle had been the Republican candidate from Delaware, he almost certainly would've won. Instead, the Tea Party nominated everybody's favorite non-witch against masturbation, Christine O'Donnell. Harry Reid won in Nevada despite 14% unemployment, facing off against the Tea Party's Sharron Angle. (The candidate I feared was Danny Tarkanian, who was low-key enough to just plod his way to victory and then become a very bad Senator.) And if Republicans had gone for establishment pick Jane Norton instead of Tea Party favorite Ken Buck in Colorado, they wouldn't have had to deal with Buck's shameful treatment of a rape victim when he was District Attorney, which threw the race back into play. Now Josh Marshall is saying that Bennet will probably win, since the remaining votes are from areas where he's strong.

I can see how the Tea Party helps Republicans maintain party discipline, keeping any Republicans from supporting things like health care reform for fear of losing their primaries. But sometimes they nominate candidates who aren't housebroken when there's an alternative who would have won. Those of us who admire Michael Bennet, laughed at Christine O'Donnell, and are happy to see Harry Reid return to the Senate have the Tea Party to thank.
Posted by Neil Sinhababu at 11/02/2010 11:57:00 PM

When you realize the amazing amount of money put into the race in CO, it is indeed wonderful news they did not pevail. It won't be long until there is an organization within the tea party and no one will be able to tell them from t he GOP.