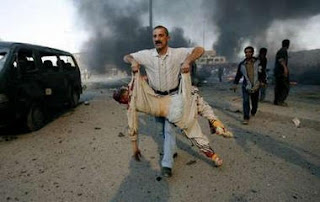 Fuller transcript at ThinkProgress, with two other GOP congressmen agreeing -- not only that the war was a mistake, but that Republicans generally agree about that.

It hasn't properly been appreciated in American politics that it's possible for us to start a really stupid war. The clearest way to rectify this is for people across the political spectrum to come to the consensus that we did.

I'm a little surprised by these guys' claims of consensus, and anyway I'd expect Republicans at a Cato foreign policy event to be unusually appreciative of the consistent antiwar libertarian position where you recognize that if our government really can't fix things at home, it's not going to be able to fix things in a strange country on the other side of the planet. (Chris Preble runs foreign policy studies at Cato, and the little I can see of his stuff is good.)

All this means is that they hope to pin the war on Obama and the Democrats if the President doesn't follow through on his withdrawal plans. Should a Republican win in 2012 and the US is still in Iraq, then suddenly the GOP will go back to believing we need to stay there for 100 years.