Whenever politics shows up in sports, it totally reorients my rooting interests. Other than that, you're just rooting for the clothes, as they said on Seinfeld. And that's made it very easy for me to root for the always-fun-to-watch Phoenix Suns over the past few years. Two-time league MVP Steve Nash was one of the few NBA stars to speak out against the Iraq War back in 2003. He's Canadian, so unfortunately he can't parlay his stardom into winning us a tough seat in Arizona, but I'd like to see a championship expand his fame and influence.

Things are looking pretty good for the Suns -- 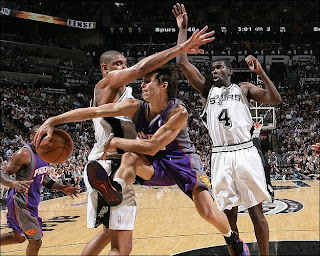 they've got the #3 seed in the West, they're facing Portland in the first round, and Brandon Roy is injured. A Steve Nash vs. Kobe Bryant conference finals would be intense.

Here he's making a characteristically ludicrous pass to Amar'e Stoudemire behind the back of Tim Duncan. If you want to see how this ended up, there's good video. As John Hollinger pointed out, the top 5 NBA offenses of the last 35 years on the basis of above-average efficiency all have one thing in common -- Steve Nash was running them.
Posted by Neil Sinhababu at 4/16/2010 02:21:00 AM

I think this season really goes to show just how good Steve Nash really is. Prior to the start of the season everyone thought the Suns would continue their decline. Some credit also goes to their management which returned to the running play style and found useful pieces to fill in around Nash and Stoudemire (who's my favorite player).

I would root for the Blazers over everyone except the Suns.

That said, I sort of wonder if in previous eras, passes like that would have been considered offensive fouls.